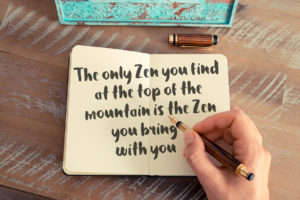 If you enjoy trying to figure out a good, challenging paradox, Zen may be the right spiritual discipline for you. That’s because Zen students attain enlightenment partially through the study of seemingly unsolvable riddles.

Good. Then you are off to a great start. You may even be experiencing what Zen students call a “beginner’s mind.” This is not ignorance but rather a state of not knowing, which is a very different thing. Ignorance may be bliss, but that is not quite what the Zen Masters have in mind.

The purpose of Zen is enlightenment, otherwise known as bodhi, satori or nirvana. To attain this state, students contemplate a series of paradoxical questions under the guidance of a Zen Master. These questions are called koans, or kong-ans depending on your spelling preference. Koans are little riddles often presented in anecdotal style. They are designed to build on this state of uncertainty to achieve ultimate knowingness.

The best-known koan is “what is the sound of one hand clapping?” The “answer” cannot be found through logic. Logic and mind must be transcended. Often the “answer” is expressed in a physical action such as the Master hitting the Zen student with a stick, though I didn’t see anyone getting hit at the Providence Zen Center.

Is that your final answer?

Even the shock of getting bashed by your teacher is not an answer. There are no answers in Zen… only inquiry…sort of…

The Zen student attains enlightenment when he or she experiences the solution to the unsolvable riddle that is life and becomes their “true self.” The answer is a state of being rather than a statement of fact.

If you are interested in pushing your spiritual envelope, the Providence Zen Center is well worth checking out. Located paradoxically in semi-rural Cumberland, the Center is a fifty-acre resource of spiritual unfoldment with spacious and well-appointed facilities.

It is headquarters to The Kwan Um School of Zen. This is an international movement consisting of over 80 meditation centers worldwide. Master Seung Sahn, the first Korean Zen Master to live and teach in the West, founded it in Rhode Island in 1972. The Center moved from Providence to Cumberland in 1979.

Its mission is to make the practice of Zen available to an ever-growing number of students throughout the world. And the Kwan Um School of Zen definitely does seem to keep Zen simple and down-to-earth without a lot of unnecessary trappings.

Zen, by the way, is a movement within (and without) Buddhism that originated in 6th century China. But you don’t have to be a Buddhist to practice Zen. In fact, there are Christian-Buddhist Retreats scheduled at the center for later this year (August 17 and November 17) which you can attend for a modest fee.

Zen’s central teaching is not a theology. It is best described as a technique for attaining enlightenment. It is a technique that is compatible with all religions. You’ll find Zen Buddhists, Zen Christians, Zen Jews, Zen Moslems, Zen Agnostics, Zen Existentialists and even Zen Wiccans.

Though “purpose” may seem an unZenlike concept, The Kwan Um School of Zen does stress the purpose of serving others. It teaches that enlightenment is useless if it does not produce a positive benefit in day-to-day life. From the Zen perspective all the problems of the world are caused by unclear minds. For there to be peace on earth, the people on earth must first be at peace.

The heart of the Kwan Um School of Zen is the daily practice of meditation in groups and centers around the world. Toward this, the Providence Zen Center offers workshops, retreats, and residential trainings, as well as a generous assortment of free introductory programs consisting of meditation, chanting, talking and contemplative walks around the center’s grounds. At some events, there are guest speakers or a chance for a “Zen interview” with a senior Zen student or even a Master. These community introductions are held Wednesday evenings starting at 6:30 PM and on Sunday mornings. Donations are accepted but there is no charge. Be aware that some Sunday sessions require a reservation at least 48 hours in advance. So, the enlightened thing to do is to call the Center before attending.

Okay, who do you think you are?

I decided to check out the Wednesday night free introductory lecture.

And, I was pleasantly surprised to find it an enjoyable and very “enlightening” experience.

There were six of us in my group, all from Rhode Island and Southeastern Massachussettes. The Providence Zen Center provided us with a late 20s-something monk-in-training named Daewu who got right down to business. His first question to us was “who are you?” Sound like a trick question? Well, it is. Whatever answer we came up with only seemed to add more uncertainty. My driver’s license says I am John Koenig. But what is a “John Koenig”? Isn’t it just a name? A person is not their name. We are also not our bodies. We sense our bodies. But who is it who does the sensing? It is consciousness. Fair enough. But where is consciousness? Who put it here? What happens to it (AKA you and me) when our bodies stop functioning? In other words, as the Caterpillar said to Alice, “who are you?”

Someone in our group thought he had the right answer. He said he was his soul. Our leader was not impressed. He asked where this so-called soul was. He would like to see it. Would the person show it to him?

Daewu gradually introduced us to an approach to understanding life, which starts with the assumption that life is not understandable. He was good at his job. Most of us were intrigued enough to find out more. This young monk-in-training was the center’s best advertisement. Throughout the evening, he appeared peaceful, centered and patient with our often inane, sometimes-confrontational questions. And it wasn’t a smiley, selling-flowers-in-airports kind of pseudo-enlightment. Daewu seemed down to earth, without pretence and at peace with himself.

In the short time I was at the Providence Zen Center, I was pleasantly surprised to experience a shift in understanding. I left with a sense that life is a dream I am dreaming, a dream with limitless possibilities by the way.

Not a shabby insight from a free introductory lecture.

Is the cup half full or half empty?

If you come to an introductory lecture as I did or attend a longer program, I’d advise to bring an open mind. Zen students call it “Beginner’s Mind.”

An old Zen story about a Master and a student explains a beginner’s mind this way. A student was trying very hard to attain enlightenment. He knew all about Dharma, Buddha Nature, Atman, and Koans and was earnestly trying to apply his knowledge. He was also highly frustrated with his obvious lack of progress and was on the verge of leaving the monastery.

The Zen Master poured a cup of tea for the student. Zen Masters are highly respected personages. So when the student noticed that the Master kept pouring tea after the cup was full, the student was polite. He said nothing. But when the tea began to flood onto the floor and yet the Master kept pouring oblivious to the growing puddle, the student felt compelled to speak-up. He said, “Master, you cannot pour any more tea into the cup.” “Why is that?” asked the Master. “Because it is full to the brim. There is no room for any more.” “Ah,” said the Master, “So it is with your mind and the study of Zen. You are so full of opinions that there is no room for anything new. How could I add anything to a cup that is already filled to the brim.” The Zen student became enlightened immediately. As we say in America, he finally “got it.”

Interested? Then pay them a visit. It is well worth the trip if only to see an authentic looking Pagoda in the middle of Cumberland. A paradox worthy of a koan in and of itself.

So, you might ask, “what do hypnosis and Zen have in common?” Truthfully, everything and nothing. Everything in that both are mental disciplines. Nothing in that the Zen practitioner tries to empty the mind and leave it empty. A hypnotist helps a client empty his or her mind and fill it with positive suggestions, new possibilities, behaviors and feelings.

Hypnosis always has an agenda: to effect a change. Zen’s agenda is to have no agenda.

So, where Zen enlightenment might get you to stop smoking cigarettes or drop 20 pounds eventually, it will be a by-product. With hypnosis, change is the purpose.

If you seek enlightenment, you would be well advised to start at the Providence Zen Center.
If you want to make a specific change or quickly learn basic meditation, then give me a call.