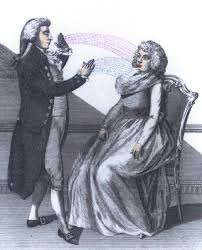 True Story: American Hypnotism Got Its Start in the Biggest Little State in the Union – Rhode Island and Providence Plantations

Mesmerism, also known as Animal Magnetism was the forerunner of modern hypnosis. It was a popular, though controversial, “alternative healing” treatment from the 1780s onward throughout Europe. Yet it wasn’t until 1837 that it made its American debut in Providence, Rhode Island.

It arrived in the guise of a French mesmerist named Charles Poyen. Monsieur Poyen’s first experienced Mesmer’s new therapy as a patient. He became a zealous promoter of what he referred to as “magnetizing” and a gifted practitioner of the art.

After immigrating to the USA, Poyen settled in Providence, Rhode Island in 1837 where he became an overnight sensation. His supporters included pillars of society such as Francis Wayland, president of Brown University as well as members of Rhode Island’s medical and academic communities.

He demonstrated remarkable healings of both physical and mental ailments in a series of lectures throughout New England as well as in Rhode Island. And, he trained new magnetizers who formed a lasting core of practitioners in the United States. In Providence alone, it was said that over 100 people were “magnetizing” by the end of 1837.

Poyen also wrote and published a small book called Progress of Animal Magnetism in New England, which explained his version of the Mesmer technique in simple language. And he even managed to start a new magazine, THE PSYCHODINAMIST or Bulletin of Animal Magnetizers in the United States, printed at Cranston and Company. He pledged that the publication would be open to “impartial discussion of all opinions from all parties viz.: doubters and unbelievers” and make the latest European developments available in the US. 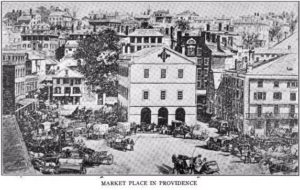 The Providence Journal 1837 Expressed Astonishment
at Demonstrations of Hypnotic Arts

A reporter’s observations give us a sense of the local acceptance Poyen enjoyed. The reporter wrote in October 23, 1837’s edition of the Providence Journal Bulletin “We do not pretend to be total converts to the cause, but will say that the exhibitions we have witnessed have not only surprised but astonished us…and if the science is a Humbug as some claim we can only say that we have witnessed experiments with some of the most scientific men in our country –who all expressed themselves as entirely satisfied that there was no deception in what they witnessed.”

Unfortunately, despite his successes, Poyen, like Mesmer before him, seemed to be a man ahead of his time.

New England of 1837 just wasn’t ready for miraculous healing, mysterious magnetic forces and claims of paranormal abilities such as telepathy and clairvoyance. His very success lead to his rapid downfall. Poyen quickly became the target of attacks by conservative clergy. Congregation members who practiced “magnetizing” were expelled from the congregation. Under pressure from the pulpits, medical societies began warning their members against being publicly identified with mesmerism.

Pressure against Mesmerism (Hypnotism) from outside Rhode Island

A columnist from the New York Journal of Commerce pulled few punches when he wrote “The learned Doctors of Divinity and Medicine in Providence have been gulled beyond endurance…the women are imposters and the men merely fools.”

Under a cloud of controversy, Charles Poyen returned to France where he died in 1844.

Today, hypnosis is once again a vital, growing part of the Rhode Island health and human development scene. Professional golfers and tennis players use hypnotherapy to sharpen their skills and improve concentration. Patients use hypnosis to ease pre-operation anxiety and speed post-operative recovery. Addicts and alcoholics use hypnotism to deal with the challenge of staying sober one-day-at-a-time. Women use hypnosis to support natural childbirth. Forensic hypnosis even helps solve crimes and bring criminals to justice and many Rhode Island state troopers and municipal police owe their sergeant’s stripes or even higher rank to the benefit of hypnotic coaching for study skills and test taking.

Students, public speakers, more than a few public office holders, people with phobias, pregnant women and other people with everyday goals and aspirations benefit from the same kind of remarkable results that so wowed Providence of the 1830s. And yes, hypnosis helps thousands of people each year quit smoking and lose weight.

Today, there are maybe a dozen active, full-time professional hypnotists in our state. Like to join the club? Click here to visit my website. Small classes for people who want to start a hypnotist practice or add hypnosis to their existing mental health or other practice.

My own contribution to Rhode Island history:
Rhode Island’s unofficial slogan – the biggest little state in the union