You are here: Home / The Magic of Thinking Big 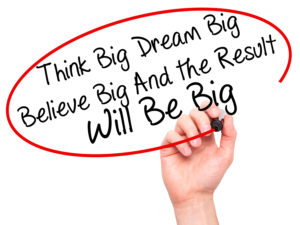 The Magic of Thinking Big

In 1981, Rhode Islanders were depressed (or so some state funded research suggested). And why not?  Massachusetts was in the middle of its high tech “Mass Miracle”. Connecticut was rich. People in our state felt like “poor little Rhody.”

Many of us had what you might call a “negative self-image” about our beautiful home. We saw our glass as half-full. Other states even had bigger glasses..

My job as a young copywriter at the state’s advertising agency was to give Rhode Islanders a new way to think about ourselves.

So, I came up with “Rhode Island: the Biggest Little State in the Union” slogan as a battle cry, what we call in hypnosis a “re-framing”.  The slogan described our state. But also gave us something to shoot for. Think Big. Expect Big!

How Can You Apply “Thinking Big”
to Your Life?

It is a simple trick: what we hypnotists call a “re-framing”.

What I did when I created “the biggest little state in the union” slogan was take something negative (a perceived weakness).  Acknowledge it. Then re-frame the weakness into strength.’

Here is the logic behind the slogan’s creation:

Fact: Rhode Island is the smallest state in the United States.

Re-frame (New Slogan): There is so much here in history, culture, diversity and

opportunity. We are literally as big as we want to be. We are the smallest but the

best so it follows Rhode Island is the biggest little state in the union.

So, why not create a personal slogan to motivate you in your life?

You’ve got nothing to lose except some negative self-talk and who knows how much to gain.  I will caution you that it is best doing it with a friend, counselor or hypnotic coach. You want a slogan that is a genuine breakthrough not a re-hashing of old ideas.  At least ask someone you trust to hear your new slogan and see if they agree it will work for you.

And it’s simple. Take a fact in your life that bothers you. A perceived limitation. Write it down. Now look within that fact and find something, anything that can be a positive. A turn-around. A re-frame And make it your personal slogan. You could even print your own T-shirt and bumper stickers. And begin to live as if your new personal slogan were true following the slogan: fake it until you make it.

Rhode Island is  “the biggest little state in the union” because we say so. And that is a lot better than telling ourselves we are “poor little rhody.” So why not stop living a negative life script and start following your own new personal battle-cry.

Your Own Personal Biggest Little Slogan

Keep in mind your new personal slogan doesn’t have to be true. It is something to grow into. You won’t have much evidence to support it at first. And, I promise you, it will feel “weird”, like who is this person acting in this new way? But you begin to act as if it were true and eventually it becomes true. This is a law of nature: thoughts lead to actions. Action leads to destiny. What we tell ourselves about ourselves does matter.

Here are some examples of re-frames (new slogans):

Over-eater Who Wants to Lose Weight

Re-frame (New Slogan): I may be fat today but I will be skinnier tomorrow. Enough is enough and I have had enough. What’s more I am enough: I am worth living a great, healthy life.  Eating healthy feels delicious. I now have an appetite for life.

Worrier with a Pessimistic Attitude

Facts: I spend a lot of time worrying about the future

Re-frame (New Slogan): I pay attention to today: tomorrow takes care of itself.

Cigarette Smoker Who wants to Quit

Facts: I have smoked 20 cigarettes a day for 20 years and tried to quit without success a dozen times.

Re-frame (New Slogan): I am a Non-Smoker: cigarettes have no power over me.

Anyone in a Negative Mindset

Facts: These can include real as well as imagined “facts”: not enough money, stuck in a career or relationship, recent loses, a pattern of “failure”.

This last reframe/new slogan was suggested by Emile Coue a French hypnotist from the early 20th century. He wrote about this simple, life changing slogan in a famous book he called My Method that became an international best-seller. And it does change lives. Try it for 30 days for 5 minutes a day and see if you don’t notice a difference in attitude and behavior.

A New Empowering Personal Slogan
is Just Part of the Solution

I am not a big fan of the slogan “No pain. No gain.” because I don’t believe we have to suffer to end suffering. On the other hand, I value the wisdom in the slogan “Rome Wasn’t Built in a Day.”  And though you need more for healthy Mental Nutrition than an empowering personal battle-cry it is certainly a good start

Remember the Chinese slogan: “A journey of a thousand miles starts with one step.” Well, creating a new slogan to live by is certainly a good first step.

Feel like a failure? Well, try on this slogan for a week and let me know how it feels: ”I am the most successful failure the world has ever seen.”

You can use a slogan like that to build an empire.